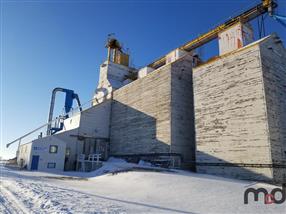 1. Highest Bid or Any Bid Not Necessarily Accepted.
2. Legal Fees are the responsibility of the respective party. Transfer Fees will be the responsibility of the Purchaser.
3. Upon agreement to Sell the Purchaser will be required to pay a non - refundable deposit with Certified Funds to McDougall Auctioneers of 10% plus the Buyer's Fee and applicable taxes within 24 hours.
4. Remainder of funds and title transfer to occur within 21 Days of Sale Agreement.
5. All auction items are sold buyer beware and as is where is.
6. Subject of a $1500 Buyers Fee.
7. Offers will be conditional upon the offeror, if accepted, being able to enter into Lease Agreement and the applicable rail agreement (Siding Access Agreement for Gull Lake and Track Access Agreement for Wapella).
8. Offers will also be subject to Court Approval

A refundable deposit of $5,000 is required to participate in this sale. Please allow a minimum of 24 hours to be registered. NO FINAL DAY REGISTRATIONS WILL BE PERMITTED.

Please contact our Real Estate office to start the registration process. Prior to contacting our office, please ensure you have your bidding account for McDougallbay.com completed and set up.

Refundable deposit will be returned within 5 business days to unsuccessful bidders. You may also provide us a copy of a void cheque so that we can return the deposit more quickly.

There is a lease in place that the purchaser will haveto assume, as well as a Rail Siding Agreement or a Track Access Agreement that the potential purchaser will have to arrange with CP Rail. These agreements will be made available to qualified interested purchasers upon request, and will be considered confidential and non-transferable.

Formerly a Pioneer Elevator, this facility was sold to a private company (Pipeline Foods) in the mid 2010’s and refurbished and used for several years, until the company closed in 2021.

This Facility consists of several buildings, all the following are included in the sale of the Elevator,

Elevator Complex: New Control Panel (EZ Sentinel 128 installed and built by Stockdales), Smaller Cleaner on second floor remains with Elevator, Bulk Weigher is Hydraulic and has 2.5 Ton Capacity, Leg Capacity is approximately 44 metric Tons every 20 mins or 2 M.T. per minute. Drags for Loading is Half Speed, but Faster when pulling in. Variable Frequency Drives are installed on Panels. Newer Man Lift installed. Stairs are installed to second level.

Other Improvements of Note: All ties on siding are replaced, All Drags have new Nylon Paddles, All Drags are relined with AR Steel, All Bins are Hoppered.

Lease Obligations & Details: There were two agreements between Pipeline and CP in respect of Gull Lake. The purchaser of this facility would assume the existing Lease that Pipeline Foods had and would enter into a new Siding Access Agreement. Both agreements are provided below under supportive documents.

a) Lease Agreement – existing Lease to be assumed

The rent under the Lease Agreement was $2500 per year due on September 1 in each year of the term of the Lease. The Lease term expires on August 1, 2023, but can be renewed for an additional 5 year term (and thereafter for another 5 year term – for a total of ten years to 2033). There is a 3% increase applicable in each year of the five-year initial term. There is also a Rental Review provision (clause 2.07) that CP can invoke.

Under the Siding Access Agreement, CP grants to the Tenant the right to use a portion of the rail siding or yard track to load and unload goods sent and received by rail on the CP line. The annual fee is $25,000 and that is due in January of each year. There are also fee increases of 3% each year going forward. This agreement continues in effect until terminated by either party (CP or the User) on 90 days notice. CP provided a draft agreement for review by the party purchasing the Gull Lake facilities and assuming the Lease.