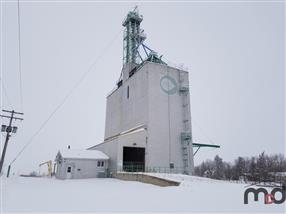 1. Highest Bid or Any Bid Not Necessarily Accepted.
2. Legal Fees are the responsibility of the respective party. Transfer Fees will be the responsibility of the Purchaser.
3. Upon agreement to Sell the Purchaser will be required to pay a non - refundable deposit with Certified Funds to McDougall Auctioneers of 10% plus the Buyer's Fee and applicable taxes within 24 hours.
4. Remainder of funds and title transfer to occur within 21 Days of Sale Agreement.
5. All auction items are sold buyer beware and as is where is.
6. Subject of a $1500 Buyers Fee.
7. Offers will be conditional upon the offeror, if accepted, being able to enter into Lease Agreement and the applicable rail agreement (Siding Access Agreement for Gull Lake and Track Access Agreement for Wapella).
8. Offers will also be subject to Court Approval

A refundable deposit of $5,000 is required to participate in this sale. Please allow a minimum of 24 hours to be registered. NO FINAL DAY REGISTRATIONS WILL BE PERMITTED.

Please contact our Real Estate office to start the registration process. Prior to contacting our office, please ensure you have your bidding account for McDougallbay.com completed and set up.

Refundable deposit will be returned within 5 business days to unsuccessful bidders. You may also provide us a copy of a void cheque so that we can return the deposit more quickly.

Formerly a Cargill Elevator, this facility was sold to a private company (Pipeline Foods) in 2017 and refurbished and used for several years, until the company closed in 2021.

This Facility consists of two buildings, all the following are included in the sale of the Elevator,

Formerly a Cargill Elevator, this facility was sold to a private company (Pipeline Foods) in 2017 and refurbished and used for several years, until the company closed in 2021.

This Facility consists of two buildings, all the following are included in the sale of the Elevator,

Elevator Complex: Made up of the Offices, Testing Facilities, Truck Scale and Unload Area, and Bin Area. Facility has 24 bins divided by size (4 – 165 Metric Tons, 4 – 80 Metric Tons, 16 – 130 Metric Tons). All Bins are hoppered but require new tin sheeting installed. Using both legs to load resulted in an average capacity of 100 Metric Tons in 25 minutes if run properly. Or one leg could load one truck in 15 minutes. The Truck Scale had a weight limit of 66,000 kg. All blue exterior pipes were installed between 2017 & 2018.

Cleaning Annex: Built between 2019 and 2020, Cleaner is a fractionating Aspirator Cleaner, and capable of cleaning a variety of crops. Different Rollers for different product, spare rollers are visible in the Elevator Control Room Pictures.

Truck Probe: Gamet Apollo Model 610A Truck Probe Sampler was installed in 2018, and was operating at time of shutdown.

Damages of Note: East & West Truck doors were damaged and torn down during a windstorm in Summer 2022. Temporary Fence Panels are not included in the purchase of the Elevator Lease.

Obligations & Details: There were two agreements between Pipeline and CP in respect of Wapella. The purchaser of this facility would assume the existing Lease that Pipeline Foods had and would enter into a new Track Access Agreement. Both agreements are provided below under supportive documents.

a) Lease Agreement The rent under the Lease Agreement was $2653 per year due on September 1 in each year of the term of the Lease. The Lease term expires on August 1, 2023 but can be renewed for an additional 5 year term (and thereafter for another 5 year term – for a total of ten years to 2033). After the first 5 year term, the Lease can be terminated by either party on 90 days written notice. There is a 3% increase applicable in each year after 2017.

b) Track Access Agreement This Agreement gives the user (formerly Pipeline Foods) access to certain trackage of the CP Wapella rail track to facilitate the user’s approved Operations. CP has provided the form that it would expect for this Agreement with a new user. The annual fee for the use of the Access Area will be $90,000 for the one-year term. There is a provision for 3% increase in that fee for each successive one-year term (understood to be the effect of clause 10.1 and clause 9.1). The agreement continues from year to year after the first anniversary until terminated by either party on 90 days written notice.